Blues in the Night billetter 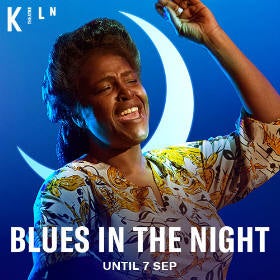 A man is a two-face, a worrisome thing who will leave you to sing, the blues in the night.

Directed by Susie McKenna and starring Olivier Award-winner Sharon D Clarke (Caroline or Change, Ghost, Amen Corner), Debbie Kurup (Sweet Charity, The Girl From the North Country) Olivier Award-winner Clive Rowe (Guys and Dolls, Carousel) and Gemma Sutton (Follies, The Rink), Blues in the Night is a scorching compilation of 26 hot and torchy blues numbers that frame the lives and loves of four residents of a downtown hotel. Featuring soul-filled songs by blues and jazz icons Bessie Smith, Duke Ellington, Johnny Mercer, Harold Arlen and many more, this will be a sizzling night to remember.

Beklager, vi har ikke billetter til Blues in the Night i salg i øjeblikket.