Festival of the Spoken Nerd - You Cant Polish A Nerd billetter 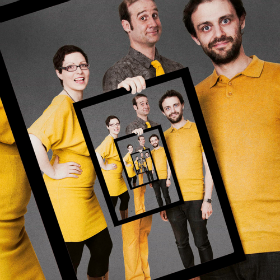 Festival of the Spoken Nerd return to Underbelly Festival a new version of their latest show, You Can’t Polish a Nerd. Using science, songs and spherical geometry, the trio go in search of jokes that other shows dare not.*
Since their last UK tour, experiments maestro Steve Mould, geek songstress Helen Arney and stand-up mathematician Matt Parker have featured on BB2’s QI, created a genuinely “experimental” comedy show for BBC Radio 4 and played the Hammersmith Apollo with Robin Ince and Professor Brian Cox.
Don’t miss this ‘resplendently geeky trio’ (The Times) as they put the “oooh” into zoology, the “fun” into fundamental theorem of calculus and the “recursion” into recursion in the ultimate show for nerds. And non-nerds.
Together they’ll be buffing up a veritable Periodic Table of joyful science comedy nuggets that will tickle your ribs and light your Bunsen burner. Full Frontal Nerdity guaranteed.
*For fear being too niche.

Beklager, vi har ikke billetter til Festival of the Spoken Nerd - You Cant Polish A Nerd i salg i øjeblikket.