From The Jam - That's Entertainment billetter 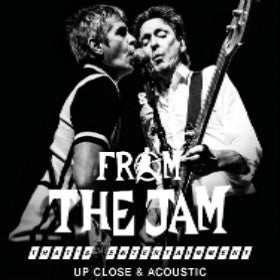 The Jam had amazing chart success with 18 singles and 7 albums to make the top 40 in the United Kingdom from their debut in 1977 to their break up in 1982. Their last 5 albums were all top ten hits and their last 8 singles made it into the top 10. They were simply one of the most loved and important bands ever.

From the Jam are led by bassist/singer Bruce Foxton, one of the original members of immortal trio, later to perform with Stiff Little Fingers. He is joined by Russell Hastings on lead vocal & guitar. Together they will be performing acoustic interpretations of The Jam‘s classic back catalogue such as “Start”, “Town Called Malice”, “That’s Entertainment”, “In The City”, “Eton Rifles”, “Beat Surrender” and “Going Underground”.

Beklager, vi har ikke billetter til From The Jam - That's Entertainment i salg i øjeblikket.