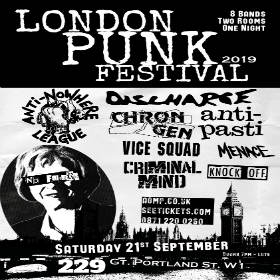 Anti Nowhere League released their debut single "Streets of London" b/w "So What" in 1981. "So What" has since become the band's anthem and has been covered by Metallica who play the track regularly to this day in concert. This was followed up by their seminal debut album "We are...the League" in 1982 on WXYZ Records & the "Live in Yugoslavia" album. Anti-Nowhere League split in the late 1980's and reformed to much excitement and several critically acclaimed albums.