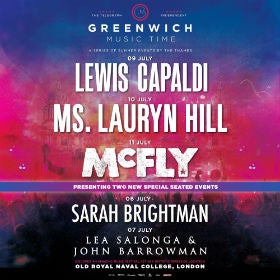 McFly are confirmed for a night of explosive pop on Sat 11 July. The band delighted fans last month by reuniting for a one-off show in London after a three-year hiatus. With seven UK no.1 singles, five top 10 albums, six sell-out tours and 10 million records sold worldwide, McFly are one of the most significant pop acts of the 21st century.