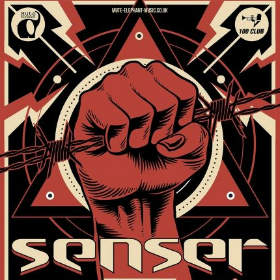 Senser (fronted by co-vocalists Heitham Al-Sayed and Kerstin Haigh) have been a force to be reckoned with ever since their debut album 'Stacked Up' crashed into the UK Charts at number 4, giving the band a platinum selling smash in 1995. With cover features in NME and Melody Maker, and a touring schedule that saw them hit the road with the likes of Red Hot Chili Peppers, Rage Against The Machine, The Levellers, Tool and Moby - not to mention SIX slots at Glastonbury - the band soon honed and sharpened their live assault and song writing chops and are back on the road again with new material.