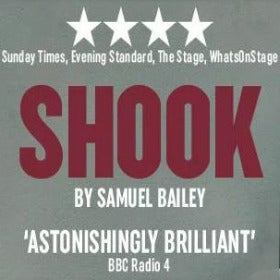 Instead of GCSEs, Cain, Riyad and Jonjo got sentences. Locked up in a young offenders' institution, they trade sweets, chat shit, kill time - and await fatherhood. Grace’s job is to turn these teenagers into parents, but can they grow up quickly enough to escape the system?

Winner of the 2019 Papatango New Writing Prize from 1,406 entries, Shook tenderly and honestly examines the young men society shuts away.