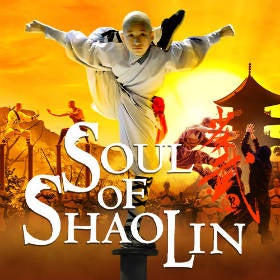 A mother’s love. A son’s struggle.

Playing in London for the first time, Soul of Shaolin is an action-packed theatrical experience featuring over 30 performers in a troupe direct from Shaolin, China. Combining dazzling martial arts expertise with a touching story of loss and redemption, Soul of Shaolin will amaze, excite and inspire the whole family.

Caught up in war and turmoil, Hui Guang is separated from his beloved mother and cast adrift in a frightening world. Upon being rescued, he is taken in by the monks of the legendary Shaolin Monastery and trained in the ancient art of Kung Fu. But when fate intervenes and his mother returns, will Hui Guang be able to triumph over the barriers holding them apart?

Featuring a jaw-dropping mix of martial arts, acrobatics, mime, potent music and vivid theatrical design, the Tony and Drama Desk Award-nominated Soul of Shaolin is the ultimate in spectacle and perfect for all ages.

Playing for 18 performances only this Autumn, don’t miss this internationally renowned experience.

Performers for the London production are to be confirmed.

Beklager, vi har ikke billetter til Soul of Shaolin i salg i øjeblikket.