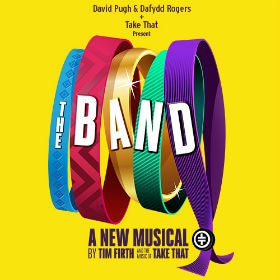 Take That are proud to present their new musical with a beautiful story written by the Olivier Award winning writer Tim Firth, The Band which is for anyone who grew up with a boyband.

It’s 1992 and for five 16 year old girls, the band is everything. Join us as this group of girls who were once inseparable reunite after 25 years apart and try once more to fulfil their dream of meeting the boyband whose music became the soundtrack to their lives.

The Band features the music of Take That, Britain’s most successful boyband of all time, whose songs include Never Forget. Back for Good, A Million Love Songs, Greatest Day. The Flood, Relight My Fire, Shine and Rule the World.

The Band has become one of the most successful musical theatre tours ever. Now it transfers to London’s West End for 50 performances only. Don’t miss your chance to experience this sensational musical at the Theatre Royal Haymarket this Christmas.

Beklager, vi har ikke billetter til The Band i salg i øjeblikket.