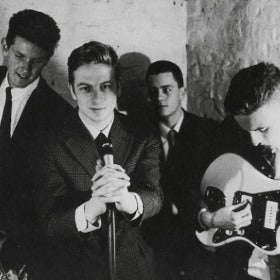 The Claim hail from Cliffe in Kent and were one of the major players in the thriving "Medway Scene" which came out of the Medway Towns in the 1980's alongside The Prisoners, Thee Milkshakes, The Dentists, Wipe Out and more. Their debut album "Armstrong's Revenge and Eleven Other Short Stories" was released in 1985 closely followed by "This Pencil Was Obviously Sharpened By a Left-Handed Indian Knife Thrower" the following year.

Signing to Kevin Pearce's Esurient Communications in 1988 they released the fantastic "Boomy Tella" LP followed by singles "Wait and See", "Sunday" and arguably their finest moment "Picking Up The Bitter Little Pieces". A one off single on Saint Etienne's Bob Stanley Caff label followed but by 1993 the band had split. In 2009, Cherry Red Records released a long overdue compilation of the band's finest work called "Black Path" which introduced a new generation to their timeless music. In 2019, The Claim are back with their first album in over 20 years and will be launching it exclusively tonight at the world famous 100 Club.

Beklager, vi har ikke billetter til The Claim i salg i øjeblikket.