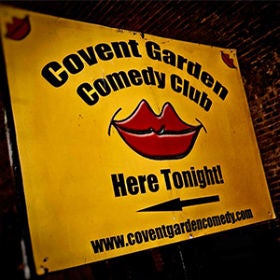 The Covent Garden Comedy Club @ Heaven is celebrating 17 years of making London laugh in 2019 and is the biggest and most successful independent comedy club in Central London with the best acts in the business. We only book the best comedians from the international circuit, many of whom are stars of  television. The comedians only perform at the club a few times a year to ensure every show is different. There are 3-4 comedians and a compere in each show.

Every Comedy ticket includes free entry to Mabel's - a modern classy club located on Maiden Lane, a 5 minute walk away, just off The Strand.

Collect your Mabel's voucher on the way out of the Comedy Show to gain free entrance and a free shot upon arrival. Private areas can be reserved at Mabel's, please contact us for info. Mabel's is a strictly 18+ venue, dress code is smart casual – trainers are fine.