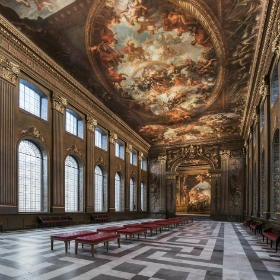 Former Home to the Palace of Placentia and birthplace of King Henry VIII and Queen Elizabeth I, the story of Greenwich starts here. Glimpse the foundations of this former royal home where new renovations to the grounds allow visitors to see parts of the palace’s foundations.

Tour Sir Christopher Wren’s landmark buildings, designed in 1692 as a home for returning seamen. Explore its magnificent exterior, wander its atmospheric grounds and courtyards, hear the stories of the people who made this place their home, plus discover the exquisite 18th century Chapel of St Peter & St Paul, the famous Water Gates and the Victorian Skittle Alley.

Alongside accessible exhibits exploring the Painted Hall’s creation, you can get up close and personal with hands-on treasure chests, filled with exquisite touch objects inspired by the Painted Hall. Try on King William’s Crown and clock, dare yourself to stare into Medusa’s face on Athena’s shield, or hold up King Louis XIV’s broken sword.