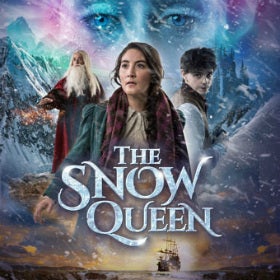 Tucked away in a long forgotten corner of the city is an orphanage. Here Gerda discovers that she is no ordinary teenager, but a Child of Magic, hidden from the reaches of the evil Snow Queen. When she shows her powers to her best friend Kai, she unwittingly reveals their whereabouts. Kai is lured away, and Gerda must journey to the Frozen North into the Queen’s clutches to save him.

Her perilous adventure includes an unlikely pirate captain and a talking reindeer, secretive elves and vicious trolls. As the Snow Queen rallies her forces, Gerda must learn the true nature of her magic powers to save Christmas and rescue Kai.

This Christmas, be enchanted by Hans Christian Andersen’s powerful tale of love, magic and self-realisation. This glittering new adaptation features a wealth of local talent from the Rose Youth Theatre alongside a professional cast.

Beklager, vi har ikke billetter til The Snow Queen i salg i øjeblikket.